This blogg is to now written in swedish. Here I make an attempt to wright in english. Notice, that I am going to update this, as soon I got the idéa to do so. This is the second version.

I started my blogg with the swedish word ”blick” that means gaze. The gaze. I’m not quite sure this english word is the quite correct one. Please protest, if you have a better.

The gaze, or the Gaze, is your consciousness. It is your soul, yourself. You put the gaze in the back of other people, and you often say you can feel, then other people put their gaze in your back.

This is an old experience. It was looked upon as an empiric fact in ancient times. You do feel it!

The idéa was widespread. We had it among the vikings, the ancient greece and of course in old Egypt. Those people did not know anything about photons and light waves. Their idéa of gazing was a spiritual part of the body, an organ in the forehead, that touched the objects for your interest.

This is a picture of the gaze!

Such a crown, tiara, piece of jewelry has never been found in Egypt by the archeologists.

Of course! It’s a picture of the deity Wadjet together with Cleopatra. There are pictures of faraos together with other deities, but a dead body of any of those faraos pals has never been found.

But this is a modern picture. The ancient pictures are often a bit different. Not always, but look at this one! Wadjet and Nekhbet, called ”the Two Ladies”, are sitting together i the forehead of farao.

Forget Tutankhamun! This is a picture of 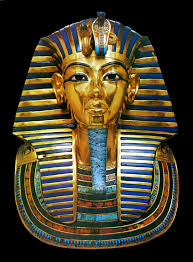 What we see here is in fact body, mind(soul) and spirit. The man and his two wives. Body mind and spirit is what Paul is writing in the Bible. That is what the older parts of the Bible is telling us about. The patriarchs have normally two wives.

As you can see, according to the Egyptian religion are our wives snakes and vultures. What idiotic male atheist can deny that? And male are we all, say the hebrew grammar.

It’s allegorical stories, and they tell us about the old philosophy, the old idéas about (hu)man. Their intention is to inform us about the differens between mind and spirit, and how they work.

I’m telling you, that most christian preachers totally misunderstand the stories. They think the Bibel is historical with example for us to follow. But the stories describe our inner fights between our intellect (with its smartness) and our spirit (with its love, conscience and aesthetic sense).

One Lady is Lilith, Adams first wife, the snake in Tree of Knowledge. As the mother of demons, the mind give birth to political ideologies and religions (e.g. nazism and scientology). Our intellect is the Princess of Lies.

The other Lady is the lady of Life, of love. Eve means life. But not only Adam had two ladies. Abraham had Sarah and Hagar. Sarah means Lady or princess. Jacob had Leah and Rachel. Rachel was his real lady, whose name means ewe, ands ewes give life to new lambs. Leah was the one with weak eyes.

The author of this part of the Bible is here religious, and declare that the intellekt can’t see God, the Truth and other interesting things, that the other Lady can se.

All Jacobs sons have namnes with meaning. We can interpret them. E.g. Reuben, Simeon, Levi and Judah have the possible meanings, I see, I hear, I think and I talk. They are sons of mind. Their sister Dinah (the ideology, the religion), daughter of Leah, caused a bloodbath.

The sound you are said to hear in a NDE is a strong R. Therefore the word for the ruling consciousness is ”R + vowel” in many languages. Rig in sanskrit. The light of consciousness is a god. Ra or Re i Egypt. Rig is one name of the scandinavian god Heimdallr, supposed to be a sun god of the bronze Age.

Now we are looking att –ligion! In latin there is a verb, ligare, present active infinitive of ligo. Tie. We have it in ligament. If we add Re and ligone, we got very close to religion.

Why add ligone? That is ablativ of ligo. Ablativ is a grammatical case in various languages used to express motion. Religion means a movably conscious tied to the matter. You don’t need any gods in religion. It’s enough with the independent existens of consciousness.

This was short from my writings. But now you know what it is about.